On Turin and the Shroud


I would imagine that in our time, with the exceptions of Rome and Jerusalem, Turin has become the most frequent destination of the Christian pilgrim.  After all, it is the Duomo of Turin, the Cattedrale di San Giovanni Battista that holds the famous Shroud.

And for Rhonda, and a little bit for me, we found ourselves moved in the middle of May on a pilgrimage of sorts, to view an artifact that I doubt and that she thinks might be.

Yes, there are nuances and details, spaces between my skepticism and her entertaining possibilities.  She’s a good Catholic girl, and I am one of those people not hardwired for belief,  but this would have something to do with the both of us, we figured, so we left Turin’s Porta Susa—a long and horizontal (and disappointingly immaculate) train station in the western part of the city, bound for the cathedral by a meandering city bus.

Perhaps on trips like this, the pilgrim attunes his mind to approaches.  Perhaps it was why the passengers on the bus volunteered to locate our stop for us, an older man signaling well beforehand the prossima fermata virtually in front of the Duomo.  As always, a simple and benign prego to our thanks, the helpful and genuine friendliness of everyone we encountered from the train station to the presence of the Shroud a testament to civility at the least, to the courtesy of this solid and open city.

Turin struck my imagination as a city of piazzas and colonnades.  Of course, you could say the same of many of the large Italian cities, but somehow in Turin this arrangement called attention to itself, nowhere so strikingly as around the Duomo.  There sat the major cathedral of the city, San Giovanni Batista, blockish and externally plain when compared with its counterparts in Florence and Milan, tented and scaffolded in parts by the continual reconstruction you see around the monuments of this country.  Hugging a brick wall to our right, we walked a block or so and turned right, as we had been guided, toward the Giardini Real, the expansive park that abuts the cathedral and the Palazzo Real, the grand palace of the city. 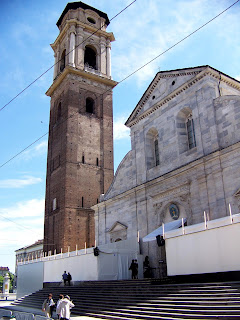 It was here that the pilgrimage began in full, and the shops lining the streets—not simply the cramped, provisional booths selling photographs and wall-hangings of the Shroud (and even, on one occasion, a splendidly blasphemous dish towel), but also more respectable shops, it seemed, their wares a bit more permanent and a lot more expensive.  This was the stuff of medieval pilgrimage, where like the 1st century Temple in Jerusalem itself, part of the space was ceded to Mammon.

This mercenary part of the journey didn’t bother me.  Perhaps it was my cynicism, in full flourish since we had learned that the Shroud itself, not its replica double, would be on display this summer in Italy.  At the time we discovered this, I remember thinking, “And the difference is…?” Because it makes no difference if the original Shroud is not the Shroud, I thought.  What, after all, could distinguish one version from another when both are images of some imagined thing, a representation of a collective desire for something to be more than it is?

Here we were on the sidewalk now, passing booths will all kinds of food—nourishment for the pilgrims, no doubt, though the sandwich of Sicilian sausage could also have been something more than it was.  The highlight of the movement through the booths was a young vendor selling pastries, who told me, in impeccable and subversive English, “That will be one hundred dollars.  We fill them with diamonds, you know.”

We had been told to expect hours of waiting.  The day was warm, and the prospect seemed miserable to me, as the one thing I hate more than lines is hot weather, but as we passed through a friendly but thorough security check and into a tented walkway, the temperature was not unpleasant and we seemed to be moving at an unanticipated pace.  All around us were languages we did not speak: I hear Italian, of course, but French and German as well.  I heard the recognizable inflections of American English, but missed the words in our surprisingly swift movement in the queue.

We were bound toward shadows together, I thought.  And for some reason, it was no Biblical verse that came to mind, but the last lines of Bergman’s Seventh Seal:

They move away from the dawn in a solemn dance away towards the dark lands while the rain cleanses their cheeks of the salt from their bitter tears.

Toward the dark lands we hastened, now being divided into small groups.  I clung to Rhonda out of the silly fear that the ushers would somehow divide us, and we would enter the presence of the Shroud separately, losing each other in the crowded shadows.  Fortunately, nothing like that was remotely possible, and we entered the cool dank air of the Duomo and were guided to a long, illumined display that I first mistook for the Shroud itself until, on closer approach, it was evident that what stood in front of us was a photograph.  A display in several languages described the Shroud for us, pointing out—almost like a lecturer’s highlighting, complete with pointer and magnified slides, the visual evidence marshalled for a crucified body, lacerated and pierced in the hands, feet, and side.

When you knew where to look, you were prepared for the viewing.  Even the pastries are filled with diamonds.

Into the hushed darkness we were guided, cautioned against flash photography, of course (sh the attached picture of the Shroud is not my own).  This attention to protocol intensified the shadow, made it a place outside of place, the courteous whispers of elderly ladies arranging us in rows and tiers before the famous artifact.  I thought of Rudolf Otto’s famous definition of the numinous: mysterium tremendum et fascinans. The idea of the holy as mysterious, inspiring fear or awe and yet drawing in or attracting the beholder, and doing both at the same time. 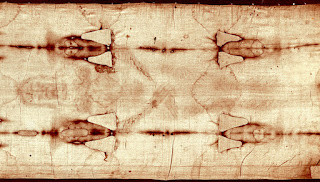 Beyond a ranging curiosity, seeing something that you owe it to yourself to see if it is on display, I confess to having no sense of the numinous on the fabric.  Yet in the hush of the room, the devotion was palpable: what these fifty people or so had carried with them from the reaches of the city, the continent, perhaps the world.  To some, this was the grail at the end of a journey, and to say, as has become customary, that it was the journey that mattered more than the arrival—well, that’s presumptuous, to tell this assembly of the devoted what meaning they were to gather in the presence of the Shroud and, even more presumptuously, how they were to gather it.  As for me, I needed no artifact to notice that the quiet around me was welcoming, that unlike the religion I have often encountered in my experience of coming up, of my struggles with a faith in the fifty years before I sat it aside at last, this was a quiet that beckoned me in with no agenda and a simple, abiding silence.  It seemed like a place at the table I might have taken had it been offered, or had I seen it, years ago.

Emerging into the spacious, far more secular grounds of the Palazzo Real, I was glad for the light despite the stillness I had left behind.  I could explain away the Shroud in a dozen ways, just as its defenders could stretch explanation to defend it.  But all this was wasted argument, between those of faith and those of skepticism, or perhaps more accurately, between people whose faiths settle differently.  I took those thoughts from the quiet space, realizing in that first breath of commotion and Palazzo and sun that, if the world is all I have, it contains places of turmoil and calm, and that, perhaps, is more than I could bargain for.  ©2015 Michael Williams
Posted by Michael Williams at 1:32 AM