On a Side Trip to Ljubljana

I remember a melancholy conversation, twenty-five years ago or so, with a dear friend of mine who had spent a large part of his childhood in Mexico.  He was telling me about a recent trip there, and about his return, standing at the very edge of Texas and looking south across a rather sparse and forbidding landscape.  Thinking of Mexico, thinking, I wish, just once, that God would bless this country.

There are places throughout the world where that thought arises, and at the time when we were having that conversation, Slovenia was one of them.  Part of what we called “the Soviet bloc”, it was lumped with a dozen or so areas in Eastern and Central Europe that the American schoolchild was hard pressed to distinguish or even identify—which one, after all, was Estonia among those former republics along the Baltic?  They were the villains in our Cold War mythology, or at best the unwilling but submissive assistants to the villain—a villain who wore Khrushchev’s or Brezhnev’s face, and had promised to bury us just as it had buried them.

You could see traces of a sorrowful history in the small antique market set up on Sunday morning along the banks of the Ljubljanica: from the imposing Habsburg architecture to the medals adorned with the SS runes and the swastika, the Soviet red star.

Surely, after of centuries of this, God would bless this country.

And sure enough, the signs are there.

Traveling north with Vlado (whom we met before in Prague [see the January 19th entry] and Rudi, our Slovenian friends, we watched the landscape change from the dry, poplar-studded Italian terrain to something more mountainous, thick with evergreens, familiar sights to those whose vistas include the American North.  A terrific ice storm had struck this region in late winter, and all around lay the wreckage of trees, and far from the highway, the occasional collapsed roofs of older buildings.  But it was a healthy land just dealt a punch, by no means a chronic condition.

And that health extends to the human landscape.  As we neared the Slovenian border, Vlado, always one for smart (if prankish) humor, asked us if we had our passports.  As I reached for mine, he broke into a grin, announcing, “Because you don’t need them!”  This not only marked what I really did not realize until this year—the friendly and convenient fluidity of European borders—but also was the occasion for our friends’ recounting of times they passed through checkpoints when they were twenty-five, thirty years younger.  Apparently, those gates were not manned by Kalashnikov-toting party faithful, but usually boys like they were themselves back then, sleepy and bored and bribable, Vlado assured us, for a pair of Levis.  He said that you never knew, the fact that I was wearing jeans that day might end up coming in handy.

Embarrassing as well, I thought. 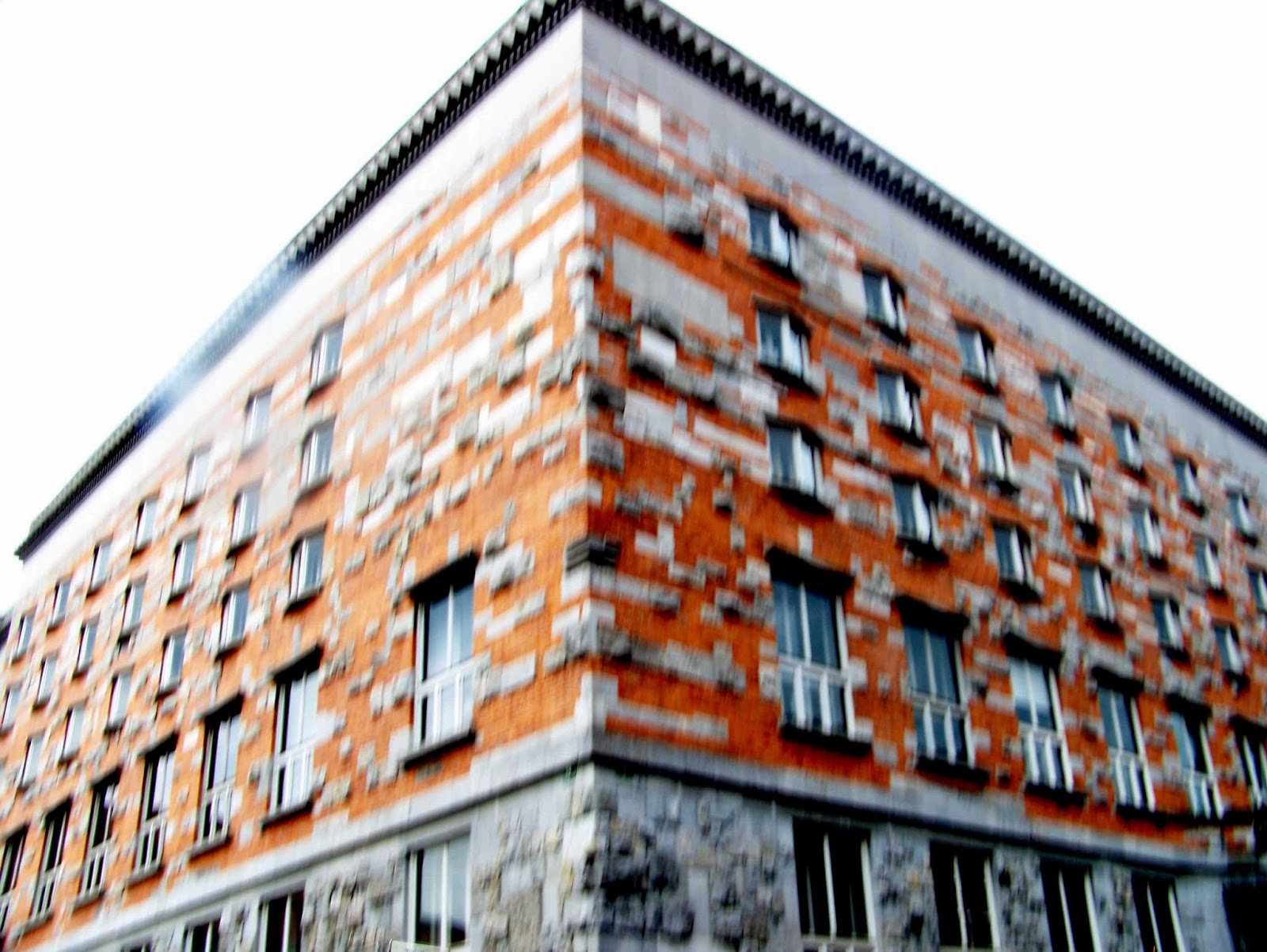 After my travels in Budapest and Prague, I had suspended most preconceptions as to what I would find in a Central European capital.  Even so, Ljubljana is a fresh and beautiful surprise.  Its central city reminds me of Dublin’s for some reason—curled around the banks of a quiet river, a wedding of 18th century streets and modern boutique commerce.  The weekend we were there was a bit overcast, but I’ve found that the clouds and the banked sunlight evoke the brighter colors in older areas of European cities—Dublin and Venice and Prague and now Ljubljana, all of which emerge beautifully in a grey day.  If you take the funicular—one of the inclined railways you see on occasion in this part of Europe (though this is one of the nicer ones)—you arrive at Ljubljana Castle, where a once-military view of the city, where the brick-red roofs of the central pedestrian zones give way to a modernized, extraordinarily new-looking expanse of cityscape.  You wonder how Western attention has passed by this beautiful place, and part of you suspects that the oversight hasn’t been the worst thing in the world for the city.

In its central areas, Ljubljana is a community of statues.  Poets and artists, for the most part, and it was humbling to realize that 1) these were exactly the people I always maintain a city should honor, and 2) that I recognized so few of them.  Among them were France Prešeren, a Romantic poet known for historical and mythic narration as well, and Jože Plečnik, an architect who virtually defined the look of this city.  Prešeren is for another time, perhaps: I’m ashamed to say I haven’t read a line, and therefore have nothing yet to say.  As to Plečnik, my lack of knowledge is a hindrance here as well, but the buildings make immediate statement to the eye, and what struck me was something that lingers in my thoughts of Ljubljana—its brilliant eclecticism.

Plečnik’s buildings sit side by side with the city’s Habsburg imposition—the monumental, 18th century Viennese declarations of dominance and power.  I mentioned to my resident Plečnik expert, the remarkable 17-year-old David (Rudi’s son and Vlado’s nephew—see again January 19th entry), that the Habsburgs “had a habit of sticking their nose into things,” to which he slyly responded, “and we Slovenians have a habit of complaining about them.”  It was David who pointed out the mix of design and medium that characterized Plečnik’s work—from the wedding of brick and stone in the National Library to the church Rudi took us to at the margins of the city. 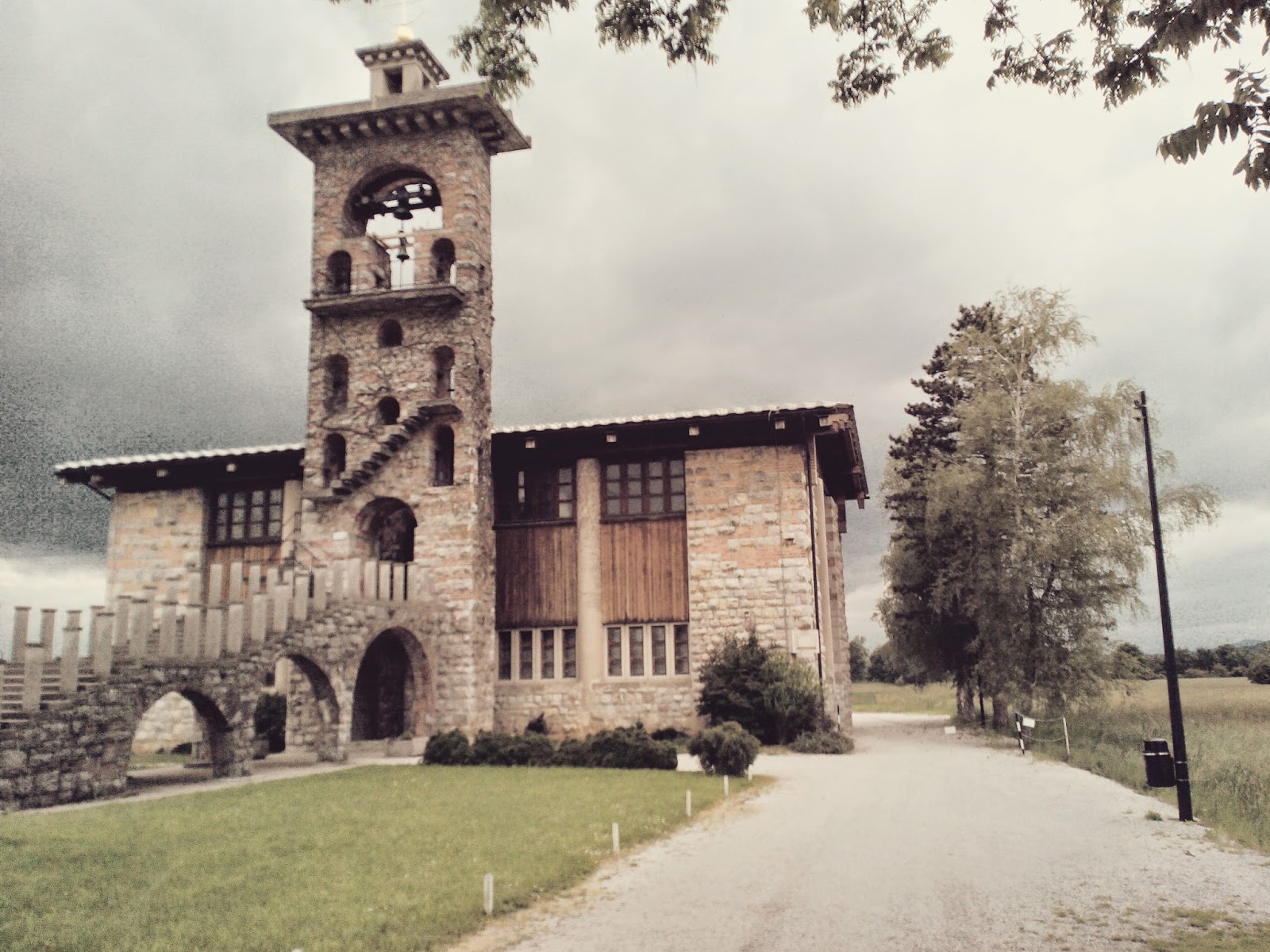 And this quality, above all others, was what struck me about Ljubljana, as well.  The brilliant, improvisational nature of its tradition, both historical and contemporary: from its integrity and artistic rebellions against the cultures that overwhelmed it by force but not by genius, to its transformations within our lifetimes from a world where young men bribe border guards with Levis to beautiful, open-air cafes, where at least half a dozen languages can be overheard at late dinner, it seems to have wedded tradition and change like Plečnik’s merging of brick and stone—a young old city in lovely and fascinating transition.  ©2014 Michael Williams
Posted by Michael Williams at 2:51 AM No comments:

Alongside the Roman ruins in Aosta, not far from its crumbling medieval and Renaissance churches,  the Piazza della Repubblica frames a fairly busy intersection, a roundabout on the Via Vodice, a number of vending stands, restaurants and bars.  All kinds of bustle that, if you’re an attentive pedestrian trying to avoid being run over in a crosswalk, might distract you from a good look at the piazza itself, famous for its Fascist architecture and sculpture.

We get uncomfortable with the word “fascist”.  Justifiably, it draws forth nightmarish associations.  Less so in Italy, where the films of Mussolini are generally those of him speaking from a balcony, clownish and overwrought, mugging for the crowds and the cameras.  Our associations are those of totalitarian darkness, wrongful imprisonment: Hitler, Stalin, Pol Pot, Pinochet—though not all are technically fascist, we have come to lump their crimes together, and we know them, to some degree, for who they were.  And the art of the totalitarian state has something coercive about it, from Riefenstahl’s breathtakingly beautiful (but malign) Triumph of the Will to the drab depictions of a Worker’s Paradise in Soviet Socialist Realism—all of it, whether technically brilliant or ham-handed, pushes us toward embracing an ideology, a compelled way of life.

But I’ve been struck by the Piazza della Repubblica, and by the revelation that, in this case, I find the fascist art appealing.

Give me a minute to explain.

Art that enforces an assumed point of view is almost always far down the list of my preferences.  It’s why I never liked Alice Walker, too, by the way (sorry, friends on the Left): when ideology trumps exploration and discovery, when art confirms whatever conclusions you’d already drawn before you encountered it, it loses one of the ways it can best catch on to our imaginations: the challenge of making us consider otherwise.
And the thing about the fascist art of Piazza della Repubblica is that it enforces less than it inveigles.  An obvious thing about the Mussolini period is its adoption of Roman symbols, very often the animal symbolism that accompanied the legends of the empire.  The she-wolf—the legendary creature who nursed Romulus and Remus, the founders of Rome—stands atop a column, perpetually framed by the Alps and the deep, bright, merciless Italian sky, so that from a distance she is all the nursemaid a demi-god would want.  But with a closer look, she seems ragged---much more like a wolf in the wild than a symbolic wolf, a mythic wolf.  She is frail up against that deep sky, her legs spindly and braced, both to nurse and simply to stand in two worlds—that of legend, and that of an observed and vulnerable nature.

And the same goes for the eagles facing her, the totemic birds that perch along the gate to the old army barracks, the Caserma Testafochi.  In deep focus behind the guardians of the gate you can see the Roman eagles, symmetrical and abstract, fit to top the standard of a legion, but the guardians are bedraggled, all gristle and feathers, looking back at their ancestors on the cornices of the building, as though they are measuring themselves against the ideal birds, as though they sense the gap of 2500 years.

And in this is the challenge and appeal of Mussolini’s artists—that they were better artists than fascists.  Stalin and Goebbels longed for a representative art whose interpretation was simple, direct, and pretty much unequivocal: you look at the statue or poster or film, and you come away with what you expected, with your beliefs affirmed.  Goebbels himself publicly hated everything about Modernism—its fragmentation, its abstraction and suggestion, in short, everything that provoked the audience to imagine, interpret, and think.  Earlier movements such as Symbolism and Impressionism had been condemned as "decadent," as products of mental or visual illness: the artists, quite simply, didn’t see the world the way it was supposed to be seen.

In Italy, though, there was less fear of the difficult.   In fact, many of Italian Futurists—artists who embraced the abstract, fragmented, and mechanized elements of contemporary culture—supported the fascists at first, and before historic parting of ways, had an influence on state art.  And there is something both appealing and challenging in the sculptures on the Piazza della Repubblica: are we following in the footsteps of Rome, or are we haunted by its presence, diminished creatures that can never match its worldly power, though we look over our shoulders at totemic eagles?  The creatures of the piazza challenge us by their associations and positioning: they are examples of symbols caught halfway between heaven and earth, and from that middle ground, casting a kind of ironic skepticism on both the mythic and the natural world, which interpenetrate so thoroughly that, on beholding the wolf and the eagles, you’re struck by the thought that neither world has the whole story.   ©2014 Michael Williams
Posted by Michael Williams at 11:29 AM No comments: