It’s a roundabout five miles or so from my doorstep to the Ten Thousand Buddhas Summit Monastery.  The road there leaves Corydon and slips onto the Old Forest Road (for a Tolkien student, the perfect road on which to leave the familiar).  From there, it winds over farmlands, reaches an unforeseen fork and takes a left, dipping between small houses and trailers, past a house complete with car-pursuing border collie (it happens every time: he lurks by the fence row waiting), then takes a left on Mathis Road, where a pair of broken-down barns announce your final turn—a mile-long driveway, rain-rutted and muddy, impassable for a goodly third of the year as it ascends toward the sprawling little complex where the monks live.

The first time there, back in the spring of 2013, we missed the final turn.  The sign for the monastery is a painted arrow on a boulder at the foot of the drive,  but it is only visible from one direction, and the direction wasn’t ours.  So we wandered for ten minutes up Mathis Road until it was all but clear that we had missed the turn-off.  On the way back, we saw it easily, turned and started the climb. 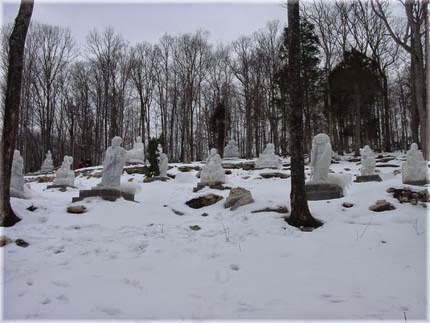 I am sure there are not ten thousand Buddhas at the crest of the hill.  Do we count the statues? the sangha (the Buddhist community)? a combination of both, or another form of reckoning?
Whatever the case, what does greet the traveler is an array of statues, fifty or sixty Buddhas, perhaps, in inviting postures of calm and welcome.  Coming up the hill for the first time was a kind of coming home—not in any profound sense of conversion or epiphany, because I’ve always been secular, skeptical, and (I hate to admit) perhaps even cynical when it comes to religious matters.  No, this homecoming was something more in the country of imagination and emotion, that feeling that you get when, after a long trip, you reach your own threshold, and the tension of wandering slides away and you feel that you can rest here, can put up your feet.

It was a feeling that surprised me, stripped of all but a residual spirituality—the call of the soul that a writer feels mid-novel.  For the thing that had brought me to the monastery was research—nothing academic or theological, but the kind of research all my novelist friends know about, the creation of the experience, of presence in a place, of paying attention to the senses as they take in what is around them.  In this case it was the glow off the white ceramic statuary, the smell of the surrounding forest and a faint undercurrent of sandalwood incense.

And most of all, the profound quiet of the place.  But more of that in a moment. 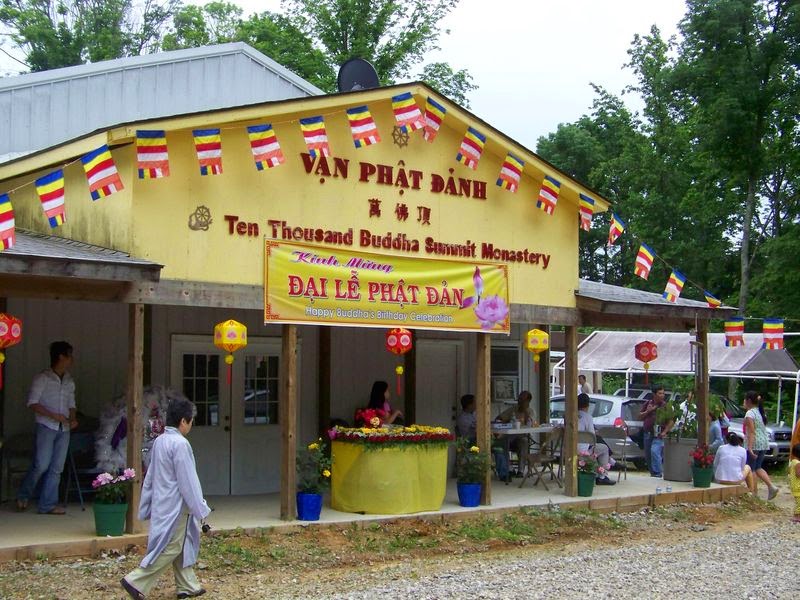 I was a few chapters into my work in progress, working title Ghost Month.  One of the novel’s heroes was turning out to be what I characterized at first as a “rock star Buddhist”—a Westerner with a sentimental attachment to the media image of Eastern serenity.  What happens, though, as a novel unfolds, is that a character surprises you; it became apparent early on that Dominic, in order to be anything beyond a shallow dilettante, would have learned something or other about the religion he embraced.

I knew then I would have to brush against Buddhism in a way that was a bit more than a passing acquaintance.  So I began an internet search for nearby monasteries or centers, and with surprise (and a little embarrassment at my own ignorance) discovered the Summit Monastery not fifteen minutes away.  Hence the winding drive, the few minutes of being lost, and the arrival at this spot in the midst of this quiet.

The silence, oddly, did not carry with it a sense of removal.  I had grown up in a wide array of settings—city, suburbia, military post, and farm.  And I was reminded of my grandfather’s farm, the sloping field and the pond, behind it a still ten acres of woods.  A surprising sense of safety amid those trees, the high-pitched, percussive call of a cardinal and the ratcheting of cicadas.  It was all sound you could rest in, comfortable with the nearby road and the passage of the everyday.

But with your feet on pavement, your thoughts could return to these woods.  It reminded my of something in Wordsworth, when the young man thought over his recollections of Tintern Abbey:

Oft, in lonely rooms, and mid the din
Of towns and cities, I have owed to them,
In hours of weariness, sensations sweet,
Felt in the blood, and felt along the heart,
And passing even into my purer mind
With tranquil restoration...

And it was later, not with Wordsworth's eloquence but with a gratitude to that eloquence, to that other monastery up in the Indiana hills and to the journey that had taken me there, I began to assemble my own thoughts and decided I would go back--this time, not simply as a matter of research.  Ultimately to make it a regular journey.

Over two years have passed since that first encounter.  I make regular trips to the Summit Monastery to meditate with the Rev. Thich Hang Dat, who has become friend and mentor in the interim.  And my understanding of what happened there that first time has changed in two years.

My failures of faith have been numberless—side roads taken hopefully, leading to dislocation and disappointment, steep roads I was too lazy to endure, roads through unsightly and mean country that I figured could not lead to where I was headed.  Whatever the case, the monastery settled in my later thoughts, I hope not superficially because I return to it again and again, practice the meditation I began there, consider it a wayside spot of sustenance and odd peace.