On the Duomo in Milan

It is like a holy forest, Carlo told us.

The design of the Duomo in Milan is more northern, more gothic than its counterparts I have seen in Florence and Turin.  There a more Romanesque style greets you—astonishing in Florence, as you emerge from narrow Renaissance streets onto a piazza where the cathedral greets you with not only its beauty but its imposing size, which you encounter like some divine manifestation.

The approach to Milan’s Duomo is more like that to Turin’s, where you see the cathedral from a distance, like a pilgrim might have seen it in the past, and the approach to it sets your thoughts on holy ground.  In the holy forest. 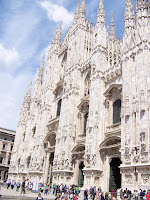 In comparison with the cathedrals of Florence and Turin, the stone of this church is pale, almost white.  The movement of its architecture is highly vertical: its spires twist like ascending tree boles or descending vines, and this before Carlo had provided the metaphor.

I had always been told that the medieval cathedral was an imitation of the city of God presented in the Book of the Apocalypse (or the Book of Revelations).  To think of it as a forest is to draw from a whole new series of associations.  There were things I noticed (and things I didn’t) that the forest metaphor went a distance in explaining. 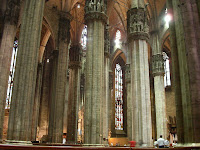 The vault of the cathedral, extraordinarily high, is like a canopy of trees, and this instantly made me think of Lorien in Tolkien’s Lord of the Rings.  Furthermore, as Carlo was to explain, the columns of the cathedral were not equidistant, their disproportion accomplishing two things: the irregularity was about movement more than stasis, the columns’ asymmetry is not apparent unless you go in looking for it, and the slightest disproportions are used to guide the pilgrim’s or worshiper’s eye subliminally toward the altar. Moreover, it recalls the medieval comparison of earthly life to travel through the wilderness (remember, that’s where Dante starts in The Divine Comedy), but this is a wilderness transformed, shot through with the prismatic light of God, through which its  particular and small imperfections are made perfect in the whole of the design, much as (I am guessing) the intentional “flaws” in Japanese pottery reflect how natural things are skewed in particular, but amount to an overall sense of coherence and wholeness.

And so it reminded me of Lorien.  How the Fellowship had endured much already, wanderings in inclement weather and over terrain that ended up being impassable—ended up sending them on the dangerous journey through the Mines of Moria, through battle with their enemies and the loss (apparently final to their despairing eyes) of their leader Gandalf.  It was in Lorien, in a holy and still forest, that they were harbored, nurtured, and redirected.

And that, to me, is the heart’s core of things.  To harbor and nurture and redirect.  Tolkien’s work is my most loved book, as most of you know, and it is the book that, in ways, defined my spiritual posture toward the world.  Lorien was a place in The Fellowship that resonated with me, that was curiously more my idea of heaven than the versions the church had taught me in preceding years.  Lorien was a readying for more adventure: it was not a stasis alone, but a readying for more of the quest.  The pillars were asymmetrical there, and its colonnades, like those in the Duomo, suggested at movement.  An idea of heaven that I like in this moment on earth: I’d like to be at rest and also headed somewhere, and though the eventual goal may be a more absolute stasis, the journey and the beauties and perils it holds seem like a heaven I’d set my sights on. 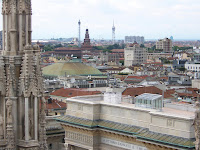 The climb to the roof of the Duomo is steep, but comprised of landings where you can pause, gather yourself, and continue.  And the view from its apex, as Milan extends itself around and below you as you stand like vigilant angels or sentried elves, is a kind of repose in itself, but no stasis, not yet.  Breathing a little hard, I took in the city, and the moment atop the cathedral seemed to me kind of like the place T.S. Eliot talks about in “Burnt Norton”: