On Returning to Courmayeur

The first time we went to Courmayeur  ended, to be honest, in a number of disappointments. 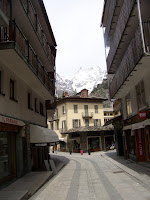 The little village near the base of Mont Blanc was, at least on the Italian side of the mountain, the point from which you could ascend  the famous mountain—at least high up its slope—by funicular.  It was a promising prospect, but the first time we went there, back in May 2014, we were waylaid by the ATM machine.

Italy is a country where the commerce of shops and restaurants is less…credit-intensive than at home.  And though, as we were to discover later, the people who ran the funicular up the side of the mountain were more than willing to accept VISA, our way from Courmayeur to La Palud where the lift began was a good 4 km away by a bus that was cash only.  So we had reached the end of our road for the day, quite literally.

Let down but not all that distressed, we spent some time wandering through the pedestrian areas of the town, its streets picturesque almost (but not quite) to the point of being dull.  It struck me as a kind of “movie Switzerland,” a little more tidied and boutiqued than I was inclined to enjoy, but not a bad place
for a few hours’ lingering. Since this was a Sunday, and since it was the middle of May, two weeks or so past the  end to Courmayeur’s  principal tourist season, we were a little out of luck even in falling back on traditional touristry: half of the shops were closed, and a number of the more interesting regional restaurants didn’t keep Sunday hours.

Lunch ended up as pizza, which I seldom mind, especially in Italy, but the one  I order included a raw egg as one of the toppings—something more interesting to see than to think about or eat, and a reminder to me that a very rudimentary grasp of the language is occasionally not enough when you’re trying to negotiate a menu.

But it was right before we went home that our financial inconvenience became a little more than just inconvenient.  Became, in fact, embarrassing.

Rhonda wasn’t feeling that good, so we stopped in a little café for some pastry and coffee.  The snack served and finished, I discovered to my dismay that the place didn’t accept credit cards, either.  A stumbling explanation in bad Italian brought out a manager—a young man name Luca—whose English and generosity were more than my ignorance deserved that afternoon.  In short, we had the coffee and pastry gratis, and I would remember his kindness in the coming year, starting from the moment our bus headed back to Aosta, on board two passengers defeated at the low levels of global finance by inexperience and bad luck.

Needless to say, we set upon ourselves to right some wrongs when it came to Courmayeur.  A return trip, we decided, to ascend the mountain.  I announced as much in my Facebook status:

Headed to Courmayeur this morning, then an ascent of Mont Blanc. No, not with piton and rope, but in safe vehicles in which you can stop for coffee at dizzying heights. My kind of adventure these days.

So much of my prediction  was (once again) wrong.  Which calls for a little commentary, beyond simply advising other travelers never to predict how the day will go.

“Safe vehicles” was, I believe, more or less accurate.  The funicular turned out to be less like the stately one we had ridden in Ljubljana roughly a year before: shaky with bumps and scrapes, crowded with German skiers (and their skis), but all in all not death-defying, so yes, that would pass for “safe”.  And “stopping for coffee at dizzying heights” was true as well—perhaps even better, in that we had lunch with a view at a place called Summit 3842, where excellent polenta made amends for sausage that was so-so, and the view, though intermittent because of cloud and mist, ended up trumping it all.

It was what lay in between that I hadn’t bargained on.  228 stairs, straight up and steep, no landings on which to lean or even collapse.  Even the skiers around us were panting.  It was my daily workout—perhaps my weekly one—and reaching the top, winded and sweaty, I had to allow that the food up there tasted better for the exertion, the view more beautiful because it was earned.  It was a couch-potato version of my own Mont Blanc climb, and laugh at me if you will, I was still able to make my climb without aid of piton or Sherpa.

And the view.  You understand Shelley:

Far, far above, piercing the infinite sky,
Mont Blanc appears—still, snowy, and serene;
Its subject mountains their unearthly forms
Pile around it, ice and rock; broad vales between
Of frozen floods, unfathomable deeps,
Blue as the overhanging heaven, that spread
And wind among the accumulated steeps

All natural drama and cataract and grandeur.  Extraordinary beauty made even more beautiful because it’s on a scale where we don’t figure in.  Indifferent Nature , the world before us and after us.  A kind of curious face to face with the Romantic Sublime—Edmund Burke and all that bunch, and knowing that our footprint is so light upon the mountains that they would be indifferent to our feelings of smallness and of insignificance. 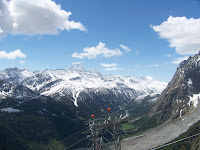 It’s hard to come down from those heights without a little humility.  Another form of which was on my mind as we parted.  I returned to the little café, 10 euros in hand, intending a year-late payment of my debt.  The place was more bustling this time, having set up a gelato bar.  An amiable, tall Frenchman who managed the place let me know that Luca was gone now.  Time had passed, it seemed, regardless of the places in which my memory had stopped.  The new manager graciously declined my repayment, thanking me for remembering and considering, and returning with the intent to make old debts good.  It’s something you can never quite do, at least not in the way you intended: but the sublime is better, more humanized, when it contains good will.  ©2015 Michael Williams
Posted by Michael Williams at 5:12 AM