Note: This to be used as the head of a section to a proposed book of travel writings.


There’s a quote from Baudelaire I’ve always found funny: apparently, when asked why he didn’r write any nature poetry, his answer was simple and direct: “I don’t worship vegetables.”  Just the right amount of bluntness and smart-assery that reveals a genuine creature of the city.

The city is, for many of us, the landscape of record.  I didn’t grow up where that was the case: my two principal childhood homes were suburban and country, and the circles of my travels seem to take me back to small towns—places of mixed blessings that seem to be where I settle, as a rule.  But I believe the city is the arena in which the drama and situations of the 21st century inevitably take place, and I believe there is nothing particularly fresh or insightful in saying that.

As far as I know, the city became the center of the Modern soul about the time it became a character in imaginative literature.  For all the Romantics’ infatuation with Nature, you have old Willie Blake writing Songs of Innocence and Experience in the height of their heyday, and you can’t imagine those poems outside an urban setting.  The city pervades them, even the crazy visionary stuff, but “London” and the Chimney Sweep poems are shot through with the dirt and noise and claustrophobia that would enter our imaginations for the next two centuries.  There’s Dickens, and Baudelaire like I mentioned.  And Joyce, and Eliot, and Kafka.  Yes, lots of writers tried to get out of town, but so many stories begin and end in the city these days: we are condensed, overpopulated, forced to live and die in the presence of each other.

But it isn’t as bleak as that.  In Milan only a week ago, I again brushed against the ideas of the Italian Futurists—Marinetti and Boccioni and their celebration of the art of machinery and noise and combustion.  Too bad some of them filtered that passion into Fascism, because they were certainly on to something in the human spirit.  We love the new, the brilliant and violent.  We love the crash and clamor of things, especially when we’re young, but in my case some of the affections lingered into middle age, so here I am—part of me Futurist, while another part romances the past and the layers of cities.

And as character in modern fiction, cities in modern times take on personality.  You get to know them gradually: at first they are mysteries, broad stereotypes of what you have sometimes heard, perhaps.  For me, the cities often take shape through what I have read: I cannot imagine Prague, for example, other than through the lens of Franz Kafka, although in doing so, I no doubt miss the city on a number of levels.  As it reveals itself through exceptions to type, the city unfolds slowly and with nuance, like Molly Bloom or Quentin Compson, and you acquaint yourself in stages, learning streets and districts and skylines as you might countenance and expression.

So this entry is intended to head up a section of my travel writings called Visible Cities.  The homage is obvious: Calvino’s book Invisible Cities is one of the most beautiful things written in the 20th century, and I owe him much more than a title. Calvino’s cities were drawn as rich prose poems, fantasies on ideas and on the way we organize, construct, and give meaning to the raw materials around us.  No wonder he used the city: it is always a chaos almost always struggling to become something: experts on chaos theory (of which I am certainly not one) claim that it is the only way to explain the traffic patterns of cities, and since that assertion requires a knowledge of physics above my pay grade, I will just assume they have a point, and that the city’s disorder was a kind of vehicle for larger, more conceptual orders that Calvino managed to discover in its parts and unruly complications. 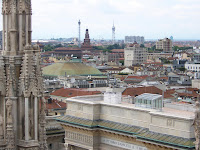 My approach is more myth than science. I plan to start with cities observed rather than conceptual, from the brick and mortar of American towns to the marble and stone of Europe, dwelling in the tactile and, I hope, balancing how they were once imagined with some of the accidents of their growth into what and who they are.  Budapest and Vienna, Prague and Turin and Genoa and Milan, Detroit and Dublin, Chicago and my own home town of Louisville, smaller than each of these and in almost all ways more parochial, and yet revealing wonders if you look long enough (It was Pogo, after all, who said, “If you squint your eyes just right, you can see the gold of the Incas”). The idea is that there is connection and order behind the building blocks of this very world, that the makers of London, say, or of Venice, had an idea they were building toward, perhaps unconsciously, and that idea was an expression of a basic way in which they were who they were.  That it isn’t crazy to personify Prague in Kafka, Genoa in Columbus or Venice in the cholera of Mann’s great novella.  That our imagination imposes myths on a place, or extracts the myth from its foundations, and it is sometimes, even almost always, hard to tell the difference between those two imaginings.  ©2015 Michael Williams
Posted by Michael Williams at 6:14 AM