My friend Carlo is Milanese, his family going back for generations in that impressive city.  We were lucky to have him as a guide on a Sunday this late spring, when it was a day of churches and sights ranging from the picturesque to the breathtaking.

As the second largest city in Italy, Milan sprawls like its North American counterparts.  It feels in ways more “modern” than Rome.  Its business and fashion centrality may account in some ways for the stylish dress and the astonishing physical beauty of many of the young adults I saw as Carlo steered us through the streets of the central city.  Indeed, the first encounter with things Milanese had been before we were reunited with our friends: we had shared a train compartment with two young Israeli women, one civil and polite, the other model-lovely and absolutely refusing to shift her entourage of luggage so that we could fit comfortably in our seats. 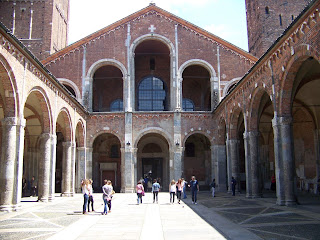 Things moved uphill from that rude introduction, which took place, granted, before our arrival, and frankly had little to do with the graciousness and hospitality that Carlo and his family would show us.  I believe, though, that there is a kind of heartlessness to beauty and wealth, and perhaps we admire them both because something in us is ready to acknowledge that both beauty and wealth are all too willing to exclude us.  But maybe this was a lens through which I unfairly glimpsed Milan now and then, born out of reading and film and popular culture, because our welcome was warm, with good food, good wine, and the humor of one of the wittiest of my friends.

Wit, by the way, can have about it a whiff of heartlessness, too—an odd part of its attraction, I think.  There’s a cruelty, for example, in a number of Wilde’s more brilliant observations that makes us gasp and laugh at the same time, and part of the laughter comes from the fact that we have gasped and caught the mean streak in the comedy.  But wit becomes amiable and benign—becomes gracious and graceful—when  it is generous while remaining sharp, and appreciative of the same qualities in others.  That is a European wit at its best: in America there’s an edge of one-up, of the cutting remark made by someone running with scissors.  But none of that was at our dinner table that night in Milan: Carlo is impossible to keep up with in matters of wit, but he makes you feel entirely at home when you make the effort. 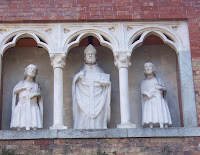 Bear with me.  I am not simply praising a friendship.  I have something to say that applies to the Basilica San’Ambrogio.

A convivial night turned into a morning that was brisk but not hectic.  We hopped a bus that took us into the center of the old city, where we attended Mass at this Basilica, a 12th century church that sits comfortably with the Roman structures acknowledged from its foundation (after all, the city was the Roman Mediolanum after it passed from Celtic hands, and the ruins underlie the medieval and Renaissance plan of the town).  Part of the genius, I think, of medieval Christianity lies in those moments when it looks the Classical tradition square in the face and does not forget its beauty and its humanized scale.  The church’s arcade is like something out of Rome, and directly outside of the cloister is the Colonna del Diavolo—the Devil’s Column.

The story has it that San’Ambrogio defended himself from Satan’s attack at this very spot.  It seems the saint pushed the devil against the column, and Old Nick got stuck the 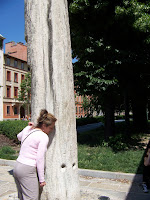 re, lodged in the stone when his diabolical horns pierced it.  It was further believed that you could smell sulfur coming from the holes, and Carlo told us that if you placed your ear against the column, you could hear the sounds that emanated from hell itself.  Which was why you see Rhonda listening at the column, because her faith and goodness of heart would be proof against infernal influence.  I, on the other hand, stood at some distance beside Carlo, and though one of the principal Milanese tourist sites observes laconically that The holes that were once present have been recently filled in, I wouldn’t trust that all the ways to hell are sealed.


The other churches we would see that day—San Maurizio al Monastero Maggiore and, of course, the Duomo di Milano, were more impressive in their lavish beauty.  They will be the subject of two later entries.  But the smaller—and in some ways plainer—Basilica had, in its hybrid and humbler structure a kind of beauty that eludes the colder magnificence I was to see elsewhere in the city.  It reflected our hosts and embodied one of the better gifts I received from the city of Milan—that beneath its opulence lay its quiet and more intimate humanity. ©2015 Michael Williams

Posted by Michael Williams at 7:11 AM